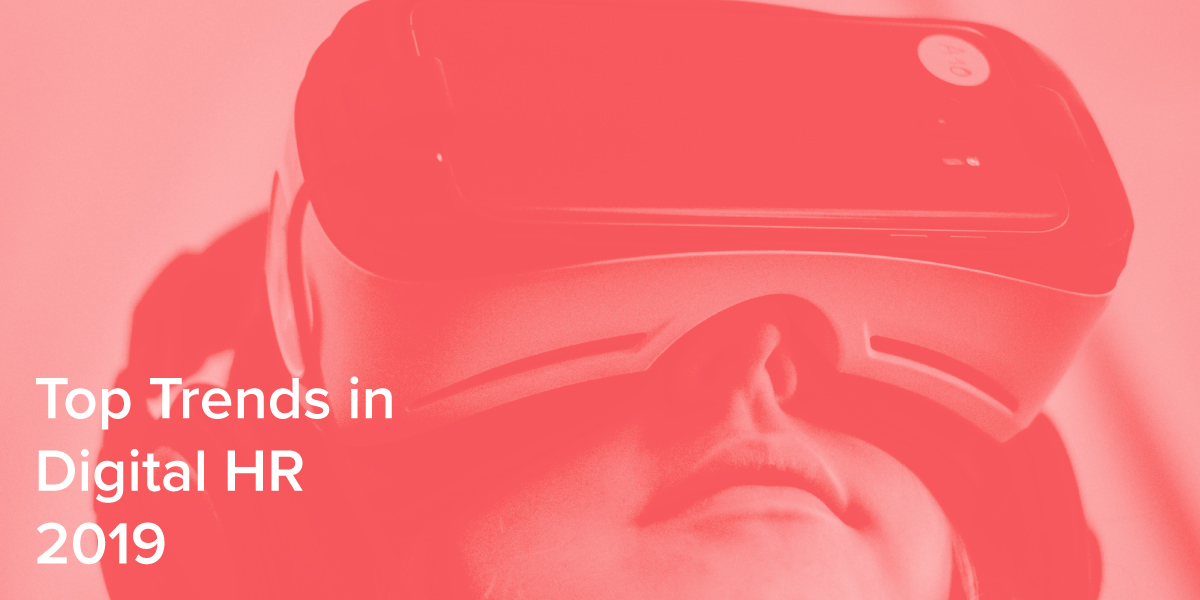 What is Digital HR? Ask ten people and you’ll receive ten different answers, none of them wrong. Some experts say HR simply follows people. Physically reaching out to people has gotten more costly and difficult, whereas reaching people online, in the digital world, where they are present more often, has become easier.

Digital adoption rates have been high among HR departments around the world. With 7 billion mobile devices in the world, and around 40% of the world’s population using these devices to access the internet, it’s safe to say that digital has changed the game.

Companies still doing HR the same way will struggle to keep up with attracting the right talent at the right time. Using digital to produce results however requires adopting the right technologies, consistently across the whole organization.

Here are some of the top digital trends being adopted by leading HR firms around the world to stay ahead of the game.

HR departments which have already started adopting some sort of technology find themselves running separate missions to search, onboard, listen to, evaluate, and retain employees. However, this often creates rifts among the teams carrying out these tasks through separate systems for each of them. Also the number of responses gathered from these processes can be increased tenfold if all these tasks are brought together on one app, according to Deloitte.

The whole process is part of a design-thinking approach to HR whereas the needs of the employee drive every part of it.

As mentioned earlier, it is important to be present where people are present, whether they’re employees or prospective talent that you want to hire. This means two things. Firstly, you need to establish a presence on platforms which prospects use to look for jobs or in general are present on. Platforms like Facebook, Linkedin, and Instagram boast up to a billion active users daily. Which means anybody who is anybody will be present on these platforms. What’s left is to find the right audience for you and instead of running after them, have them discover you through content you post online which might be of value to them.

Having your employer brand online certainly helps. Companies like L’Oreal, and Microsoft for instance maintain a strong profile which gives a very human and fun-loving face to the company, and attracts prospects. However, half-assing it (pardon the French) can look very lousy on the part of the organization, which completely defeats the purpose.

On the other hand, if you’re not a PnG, and cannot throw the big bucks at creating a strong employer brand, but still want to reach candidates and stand out on these platforms, content curation can help you post articles that are relevant for your prospects and draw them to your brand online.

It’s normal for businesses to have a stringent policy on curbing social media usage, though it shouldn’t be. Social media presence especially in this era is as essential for people as breathing. Sure, even an overdose of Oxygen is bad for you, but outright banning it is deadlier. In HR terms, cutting off social media usage can be detrimental to how employees function throughout the day. To liken it to marijuana use in the US, criminalizing the use of cannabis did more harm than good. Social media gags do more harm than good too. According to experts, it might even be against employment laws in the US to do so.

Besides, HR being present where people (employees and prospects) are makes logical sense. Companies often try to create separate digital environments where their employees can interact and it is either not adopted as fully as their employers would want, or abandoned altogether to use the normal social platforms under the radar anyway.

Which is why it is becoming more and more sensible to take advantage of your employees presence on these platforms to leverage the content they create online which involves the company, and utilize them as unofficial ambassadors of the company on social platforms.

Analytics automated rather than gathered after the fact

A lot of companies (who can afford it) have dedicated teams to collect data and analyze it. Each cycle means collecting the data anew, and then going forward with the analysis and is as difficult as the size of the organization. Carrying out the same task more efficiently means automating the collection of data and seeing analytics in real time, so that resources are not being wasted at the end of every business cycle, and more time can be invested in using the insights to improve the system.

So digitally agile businesses instead invest in platforms with built-in analytical features rather than having to extract the data and then performing a manual, detailed analysis on it through seasonal add-ons. This trend simply taps into the employee apps talked about earlier and links them directly to real-time analytics accessible on a leaders dashboard, so they can point out problems and devise solutions without losing time. Around 60% of HR managers surveyed by KPMG plan to invest in Predictive Analytics too to bridge that gap further.

The gig economy is not something new. But statistics show that it has continued to grow, especially in emerging economies where it jumped 30% in just this year, according to Forbes. Why should organisations take this into account? Businesses, small and large, have been dipping into the huge pool of human resources in the form of freelancers on platforms such as Fiverr, Freelancer.com, Upwork among others. Motivations for doing so varied from processes being easier than hiring, having more control over the agreements and getting projects done for a lot less cost among other things, however, the gig economy offers a huge variety in quality and price and type of work including construction, finance and business.

A lot of people are doing two or three jobs as a secondary source of income often taking part in the gig economy to do so. By 2023, more than 50% of the US workforce will participate at least occasionally in the gig economy. So the number of freelancers will keep increasing.

This is not to ignore the difficulty HR has had in coping with and harnessing freelance workers for projects. It is still very much a challenge logistically and as far as management is concerned to find out how to include freelance workers in the most efficient way into corporate processes.

In 2019, this will only continue to improve as businesses try to make the most of the gig economy for their projects.

The digital scope of HR doesn’t stop here. New technologies and practices enter industry practices every day but their rates of adoption vary. As a small business it is relatively easier to try out new practices and then permanently adopt them or abandon them based on the results. Adoption on a larger scale though should take care of industry best practices and the trends outlined above should be a good place to start as they’ve been quoted the most by the biggest industry monitors.

Share these among your colleagues and peers and let us know which ones you’ve already begun using. Reach out to us to find out how Contento can help you establish a strong digital presence, as it has done for various HR businesses.

Find out how you can make the most of your Linkedin business page and content.

Our technology-supported experts will guide you to social media success without breaking the bank.

How to Make a Great Linkedin Page for Business

80% B2B leads generated through social media come through Linkedin. But is it the right fit for you and how do you make an effective Linkedin Business Page? Here's a handy guide.

The new Contento customer portal: built by you, for you

We are super stoked to introduce the new Contento Customer Portal. Designed to make your life easier whilst keeping your social media performance peaking like never before.

The top trends we'll discuss indicate how digital marketing - social, search, web - have been moving in a very particular direction. Overall, more personalized, more visual, and mobile friendly experiences have been the most successful. Read on to see what else will help you make the right impact with your digital marketing efforts.

There have been quite a number of prominent voices in the Belgian Tax & Legal space which have stood out at the end of 2019. Not only have these people provided timely advice on pressing issues, they’ve also led the discussion about these issues on social media, TV, and radio.